Created 19-May-08
Modified 21-Sep-16
Visitors 24
85 photos
At 21,122 acres, Pymatuning State Park is the largest in the Pennsylvania state parks system, and 17,088 acres of it is Pymatuning Reservoir, the state’s biggest lake. Interestingly, the park is shared with Ohio, but the Keystone State got the lion’s share (in comparison, Ohio's part is a measly 4,000 acres or so).

In addition to boating and fishing, most folks around here love to spin yarns about the Linesville spillway on Hartville Road, where hundreds – make that thousands – of gaping-mouthed carp climb all over each other, all trying to snag bits of bread tossed by equally gaping-mouthed visitors. Often, they lose out to the gulls and geese that walk on their backs, hoping for morsels of their own. It’s a truly amazing sight -- one that must be seen to be believed.

Some 300,000 visitors come here each year to feed the fish, according to the Pennsylvania Department of Conservation and Natural Resources. Forget to bring a loaf of bread? No problem if you visit from Memorial Day through Labor Day, when a concession stand sells fish food as well as a few refreshments for people.

At the Pennsylvania Game Commission Wildlife Learning Center is an easy one-mile nature trail. Starting near the parking lot, it loops around the lake and ends at the other end of the lot. It’s quite a scenic trail, and paving makes it both comfortable and almost impossible to get lost. Along the way, wood observation decks overlook the lake. Birds are plentiful; it's possible to catch a glimpse of a bald eagle or Pymatuning eagle, both of which make their homes on a small island within a short distance of the nature center.
Categories & Keywords
Category:Travel and Places
Subcategory:North America
Subcategory Detail:United States of America
Keywords:Pennsylvania, Pymatuning, Pymatuning State Park
© Monnie Ryan 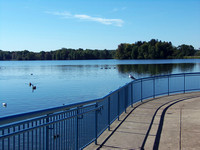 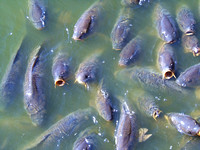 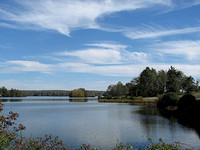 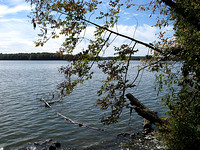 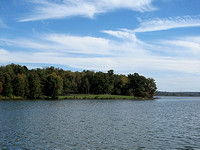 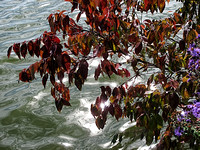